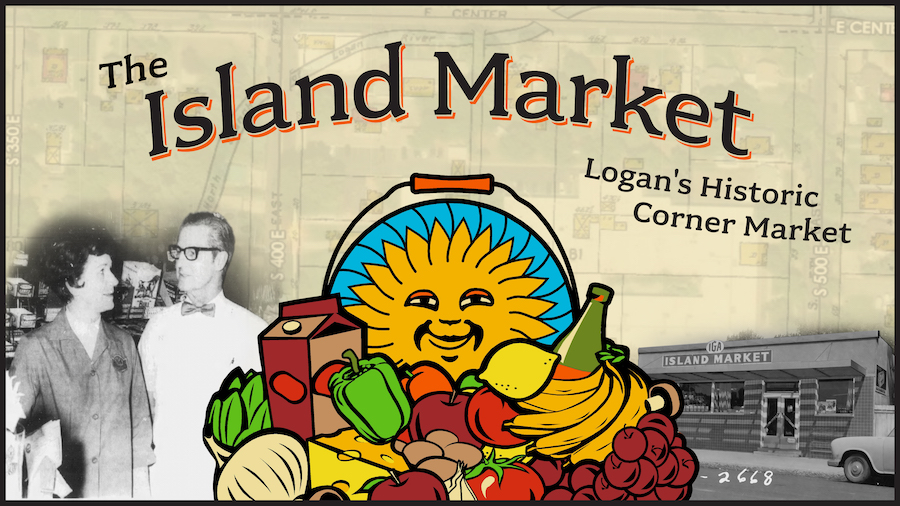 If you’ve spent any time in the Logan Island, the low-lying area at the mouth of the canyon located just south of campus, you probably know something about the Island Market, a corner grocery store on East Center Street. The locally-owned corner store is popular among students and Island residents alike, and has participated in recent student events like Nourishing Nordics and The Block Film and Art Festival. However, you probably don't know that the market is over one hundred years old and has gone through more than ten different owners (and about as many names). 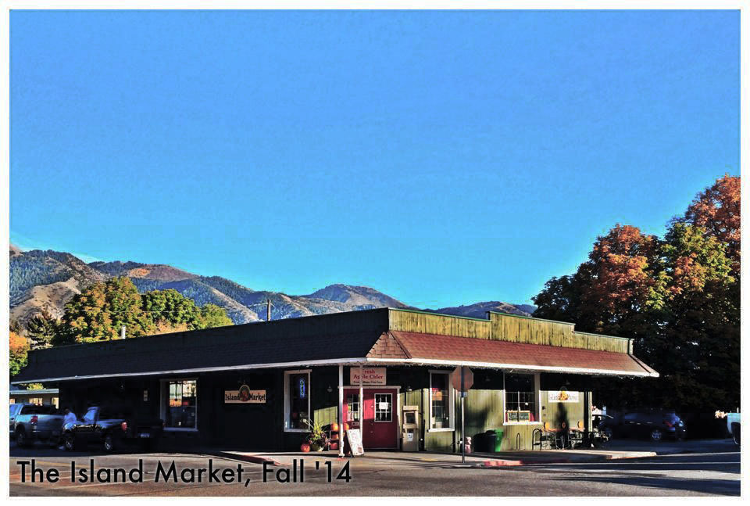 The long and complicated story of the Island Market was uncovered by eight undergraduate researchers in Dr. Rebecca Anderson’s spring 2022 Public History course, which has a history of its own. In 2021, Steven Emile and Mark Lunt, the General Manager and owner of the Island Market respectively, reached out to the History Department at USU in hopes of learning about the store’s past. Following Emile’s request, Rebecca Andersen, a lecturer who oversees the History Department’s public history track, went to Special Collections & Archives Photograph Curator and Instruction Coordinator Daniel Davis to see if the university had any resources relevant to the Island Market. Davis found several photos of the store building over the years, and Andersen decided to focus her upcoming Public History course on further researching the Island Market. 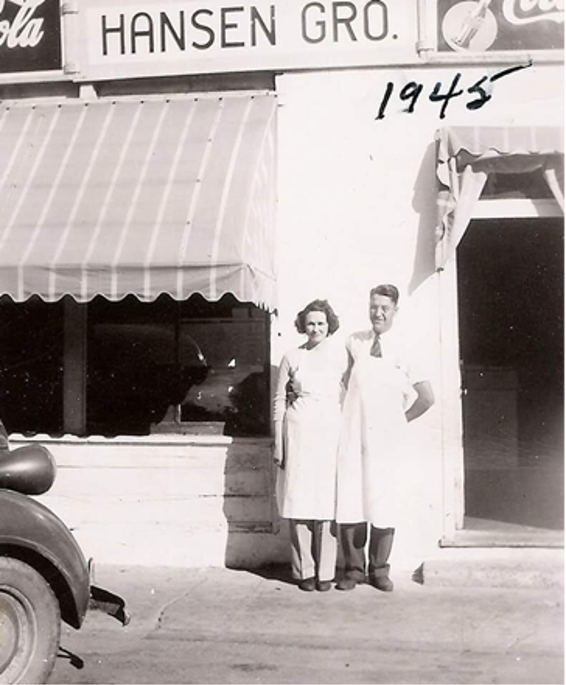 A 1945 photo of the owners of Hansen Grocery outside their store, which eventually became the Island Market.

With the help and resources of the USU Library’s Special Collections & Archives, the Cache County Recorder’s Office, open-source digital newspaper repositories, and Logan residents with memories of the Island Market, the student researchers were able to produce a series of detailed narrative essays and presentations covering the Island Market’s history, its place in the Logan Island community, and the economic and cultural circumstances that have affected the store from the invention of the refrigerator to the arrival of Walmart in Cache Valley. These presentations were showcased to Steven Emile, Daniel Davis, Brittany Bertazon, Digital Projects Manager, and Jennifer Duncan, Dean of the Merrill-Cazier Library, at the end of the semester.

Continuing the project after the Public History course’s close, the Digital Initiatives Unit at the library hired a student researcher from Dr. Anderson’s class, Sydney Lehenbauer, to work as Exhibit Curator and Lead Researcher for a digital exhibit that would connect and expand on the research done in the Public History course, creating a final product that would be comprehensive and accessible for historians and the general public alike. Over the summer, Lehenbauer worked with Digital Initiatives to create an exhibit complete with historical maps, advertisements, newspaper clippings, and photos. She writes that the project was similar to an internship for her, as she plans to continue exploring the worlds of public and digital history following her graduation. Her work with the library’s Digital Initiatives Unit also resulted in her obtaining a more long-term and formal position as Digital Projects Assistant. 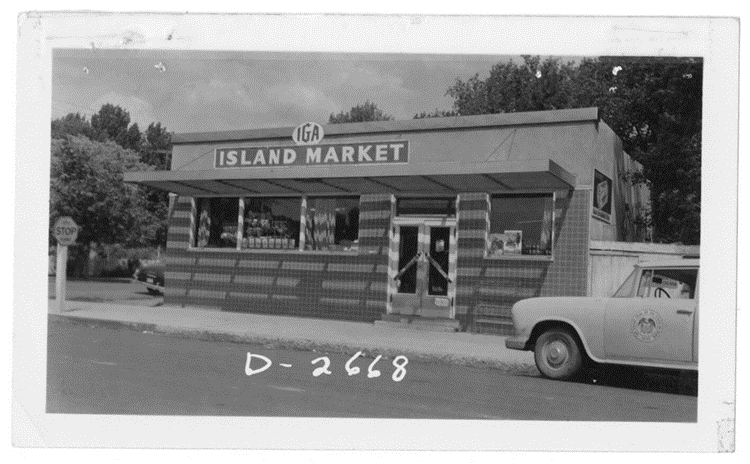 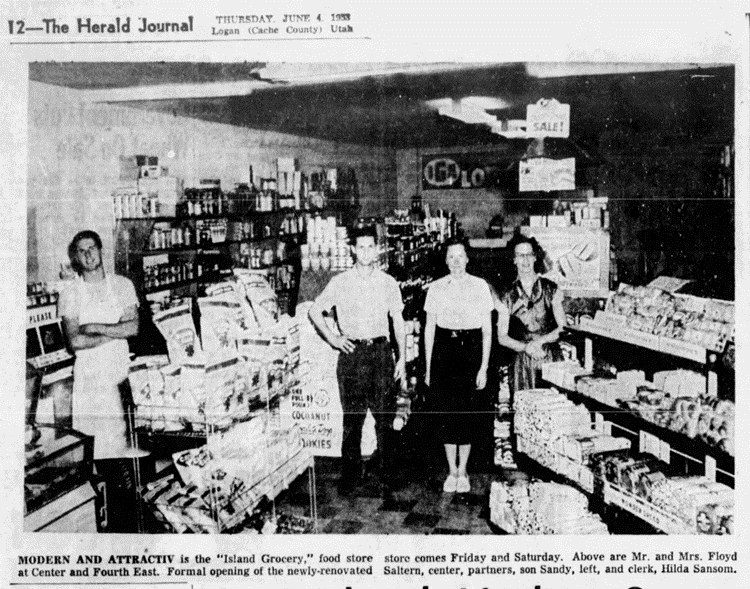 A 1953 photo in The Herald Journal picturing the newly-remodeled Island Market, the owners, and the employees.

A key part of the project’s research was uncovering the past of the building itself, along with finding its names and owners. The student researchers were able to find photos of the building over the years using the Cache County Tax Assessment Photograph Collection, a part of the USU Digital History Collections that features photos of Cache County homes and businesses taken for tax purposes from the 1930s to the 1970s. These photos helped reveal that, following its short debut as a butcher’s shop in 1920, the building has been a corner grocery store nearly continuously up to the present day, only interrupted by renovations and a period of vacancy at the beginning of the Great Depression. The market’s renovations brought not only modern styles, but new technologies and more space, as the current market is four times larger than it originally was in 1919. 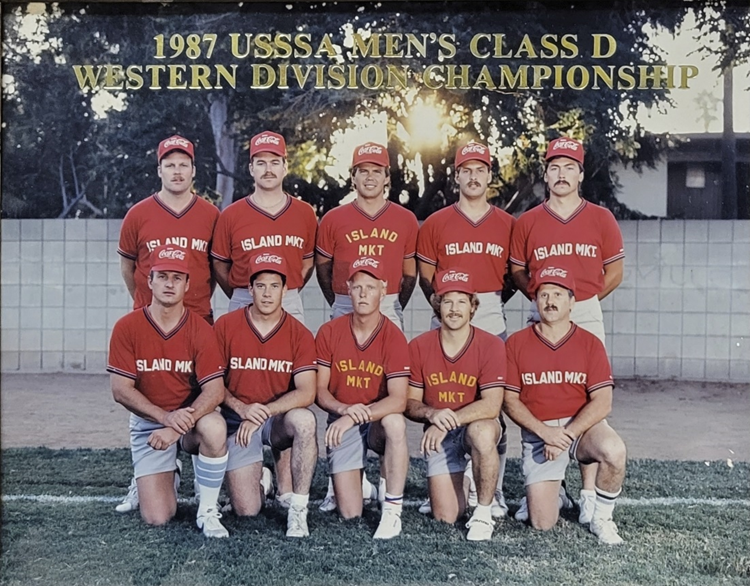 The Island Market softball team, with Thomas Duce (the store’s owner in 1987) on the bottom right.

However, looking beyond the store’s history as solely a building and a business, the exhibit also examines the market as a hub for community connections and shows the ways in which the small market has maintained this role while adapting to a changing food industry and a changing Logan. Included in the exhibit are the stories of the Island Market’s softball team, its appearances in USU student newspapers, its involvement in campus and city events, and its experiences during the COVID-19 pandemic. It is fitting that this collaboration between students, the Island Market, and the Logan community has helped create an understanding of past connections between these same entities.

The exhibit is now published and accessible online, with plans to display a QR code linking to the digital exhibit at the Island Market itself. Even though the project is published, it is still continuing, with Digital Initiatives seeking memories, stories, and photos related to the Island Market from the community at large. If you have anything you'd like to share, you can fill out this form to have your story included in the exhibit.