From Utah State University to Utah State Prison: The Rise and Fall of Mark Hofmann, Forger and Bomber 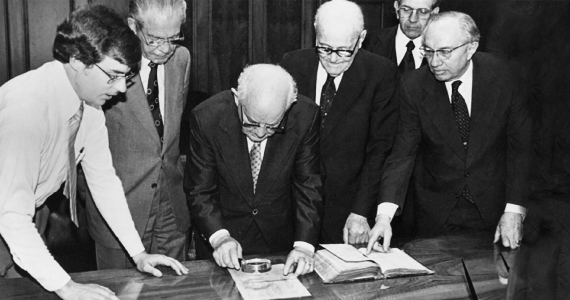 Join us on March 30, 2022 at 7:00 p.m. in room 101 to hear from Richard E. Turley Jr. as he discusses Mark Hofmann’s rise and fall. In 1980, Mark Hofmann was an obscure student at Utah State University. One morning that year, he walked into the university library with a discovery that helped catapult him to fame as a document dealer. Over the next five years, his document discoveries expanded from those related to Latter-day Saint and Utah history to stunning pieces of Americana. Ultimately, he hoped to sell the Oath of a Freeman, purportedly the earliest printed document in America, to the Library of Congress for 1.5 million dollars. Closer to home, he hinted that he was on the trail of the Holy Grail of Latter-day Saint history, the lost 116 pages of the Book of Mormon. Then in October 1985, three bombs went off in the Salt Lake Valley, the first fatally injuring a businessman who was a Hofmann client, the second killing the wife of the businessman's associate, and the third nearly killing Hofmann himself. The ensuing investigation proved that Hofmann was the serial bomber and that virtually all of his key discoveries were forgeries. He was sentenced to prison for his crimes, with a recommendation that he never be paroled.

Richard E. Turley Jr. is an award-winning historian who served for twenty-two years as the managing director of the Church History Department of The Church of Jesus Christ of Latter-day Saints. He is the author of numerous books on Latter-day Saint and Western U.S. history, including Victims: The LDS Church and the Mark Hofmann Case.